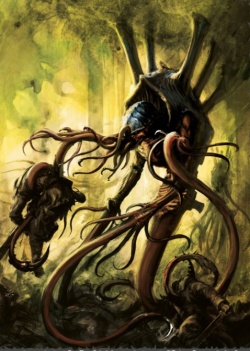 A Venomthrope is a species of Tyranid.

Venomthropes are dripping with poisons that float across the battlefield via gas-filled bladders while emitting a lethal gas that will ultimately kill a world's indigenous life and ruin its soil and atmosphere beyond habitable levels until the world is only fit for consumption by the Hive Fleet.[1] The Hive Mind uses this aspect of the Venomthrope by gathering them together in large numbers and unleashing them on a region to gradually poison it, making it harder for non-Tyranid life forms to continue the fight.[2]

Venomthropes have scrawny bodies and many whip-like tentacles that are coated in poisons capable of causing death from a single touch. Its gas bladders are its primary form of attack, producing spore clouds of yellowish vapour containing phage organisms lethal to non-Tyranid life while providing cover to Tyranid creatures. Brief exposure causes nausea and spasms, while more than a minute results in infection that allows no escape for the victim from their organic tissue slowly breaking down.[1]

Leaving the floating Venomthropes on their own is also a bad tactic decision, because Venomthropes' poison not only kills the indigenous life of the planet, but also its atmosphere and soil, leaving the poison-shrouded planet fit only for consumption by the Hive Fleet.[1]