The Sigillite is an original audio drama in the Horus Heresy Series. It was written by Chris Wraight and published on April 2, 2013. It was later released in prose as an e-book on 26 January 2016 as part of the "Tales of the Knights Errant" week.

Warmaster Horus has divided the Imperium in a bloody civil war, but while his armies prepare for battle the Emperor himself remains curiously absent. In his place stands Malcador – legendary Sigillite, First Lord of Terra and regent to the throne, and now arguably the single most powerful man in the entire galaxy. Imperial Army officer Hasani Sabbyat is seconded to Malcador’s command for a secret mission into the wastelands of Gyptus, and along the way he learns the truth behind the Heresy and a great deal more about the destiny of mankind. Where do Malcador’s true loyalties lie?[1] 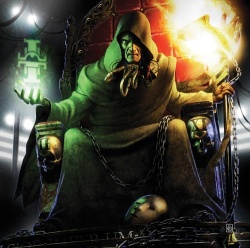