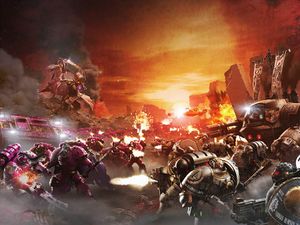 Fulgrim is a novel by Graham McNeill and the fifth book in the Horus Heresy Series. The novel was released in the UK in July 2007. It was later included in "The Novels: Volume 1" e-book collection.

Under the command of the newly appointed Warmaster Horus, the Great Crusade continues. Fulgrim, Primarch of the Emperor's Children, leads his warriors into battle against a vile alien foe, unaware of the darker forces that have already set their sights upon the Imperium of Man. Loyalties are tested, and every murderous whim indulged as the Emperor's Children take their first steps down the road to true corruption — a road that will ultimately lead them to the killing fields of Isstvan V...

In the novel, the battles of Fulgrim and the Emperor's Children are juxtaposed with the work of the Remembrancers who work in the 28th Expedition, and their parallel fall into decadence. The Emperor's Children were obsessed with perfection - due to the lack of warriors around the discovery of Fulgrim, there was no way that Fulgrim's legion could compare with the Luna Wolves or Ultramarines for quantity of victories, so they concentrated on the quality of victory. During the Laeran campaign, Apothecary Fabius was ordered to enhance the warriors of the legion by adding organs to the marines. By tampering with the geneseed of the Legion, Fulgrim was committing heresy, yet he continued modifying the legion in such a way behind closed doors. This mutation was effected on many, including Eidolon. At the end of the campaign, the Primarch took a weapon from the Laeran capital, a sword which would unleash the daemon which lived in it upon him. He began to wear this blade, rather than Fireblade, the weapon forged for him by Ferrus Manus.

Fulgrim valued art and beauty above much, but as the whispers of Slaanesh slowly changed him, he and his legion began to indulge in orgies, culminating in a concert which summoned daemons to the stage. This corruption also caused Fulgrim to destroy many Eldar Maiden Worlds, even after a meeting with Eldrad Ulthran. After the Isstvan III war between the Loyalist troops on the ground (including Saul Tarvitz and Lucius), Fugrim travelled to the Isstvan V Drop Site Massacre, and overcame his brother, Ferrus Manus, while he and his brethren, the World Eaters, Sons of Horus and Death Guard slaughtered the Iron Hands, Raven Guard and Salamanders. At the coming of the other traitor Legions, the Night Lords, Iron Warriors, Word Bearers, and Alpha Legion, Fulgrim was indecisive over killing his brother, who he had previously tried to woo to the Horus Heresy, finally gave in to the Daemon who had been tempting him for the entire novel, and beheads Manus.

The Daemon-Fulgrim gives the head to his brother, Horus, who vows to release Fulgrim.