Garro: Oath of Moment is an original audio drama in the Horus Heresy Series, and the first in the mini-series featuring Nathaniel Garro. It was written by James Swallow and performed by Toby Longworth.

In surviving the horrors on board the Eisenstein, Nathaniel Garro proved his courage and absolute loyalty to the Emperor. On his return to Terra, Garro is despatched on a mission of even greater importance - given to him by Malcador the Sigillite himself. He soon finds himself back amongst the stars and on the fields of battle, fighting to achieve his higher purpose...

Nathaniel Garro, former Battle-Captain of the Death Guard Legion, has delivered the warning of Horus's treachery to Terra, but is now a warrior without a war. Malcador gives him a new purpose: his mission is to gather a group of warriors from across the Legions, both loyalist and traitor, and return with them to Terra. When Garro asks for what purpose, Malcador's cryptic response is simply, "for the future."

The first journey of Garro's mission takes him to Calth, in the midst of the Word Bearers' surprise attack on the Ultramarines, who have been scattered across the planet. After dispatching a group of Daemons attacking a squad of the Imperial Army, he demands the location of the Ultramarines' 21st Company, under the command of Captain Erikon Gaius.

Gaius and the remnants of the 21st Company are defending one of the approaches to Numinus, Calth's capital city. Garro arrives and helps the Ultramarines defend against the next Word Bearers' attack, but Captain Gaius is killed by a Chaos war machine. To their surprise, Garro says the object of his mission was not Gaius, but rather Tylos Rubio, one of the Battle brothers. Rubio is a powerful psyker and was a Codicier of the Legion, before the Council of Nikaea obliged him to resign his position.

Garro urges Rubio to leave with him before the next assault, but Rubio refuses to abandon his brothers. Garro accepts this, and helps to defend against the next, overwhelming assault. As the Ultramarines are driven back into the railway tunnel by an advancing squad of Chaos Terminators, Rubio is pushed over the edge and unleashes his dormant psychic powers, driving the enemy back and collapsing the tunnel. The Ultramarines are saved, but turn their backs on Rubio for breaking the Emperor's decree. In bitterness, Rubio accepts that he has no choice but to swear fealty to Garro and Malcador. 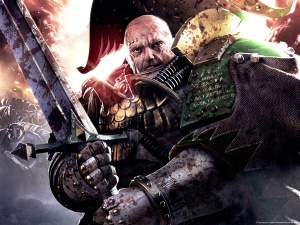