The Cobra Class Destroyer is a torpedo boat used by the Imperial Navy and Basilikon Astra.[10] 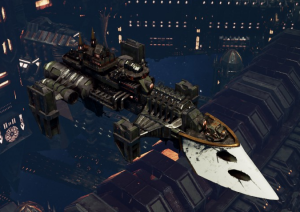 It is fast and manoeuvrable enough to get into a position from where its torpedoes will do most damage. However, due to its small size, large engine signature, and relatively poor armour, it does not stand up well to enemy fire. This shouldn't be a problem, however, due to the long range of a torpedo. Cobras act in squadrons of between two and six ships, making a torpedo volley from a squadron enough to cripple a large capital ship. It is the smallest independent Imperial warship, the smaller ones being carried aboard larger cruisers.[1]

The Cobra has a pair of torpedo tubes in the prow, and a single weapons battery positioned to fire to the sides, and in front of the ship. The weapons battery is a purely defensive measure, for when the Cobra is attacked by enemy escorts. It is short-ranged, and is almost never used to attack a capital ship, as it simply is not powerful enough to do any real damage. Cobra Class Destroyers are often seen fighting alongside Space Marine formations.[1]

A Cobra Destroyer was the sole surviving ship during the Yuctan Incident, the Imperium's first encounter with Necron naval forces.[2]

The Viper Class Missile Destroyer is a converted Cobra Destroyer. Carrying Boarding Torpedoes over their standard armament by adding more torpedo tubes, the conversion program was pushed by the Gareox Prerogative. The experiment was not a success, however, as the destroyers could not carry enough crew to man the torpedoes and fight the ship. As a result, most of the Vipers have been converted back to their standard armaments but use the extra Torpedo tubes to carry more offensive armament. These ships have since been designated as Missile Destroyers and are organized into separate anti-ship flotillas by the Imperial Navy. They are most often employed for mass torpedo attacks, proving ineffective in convoy protection duty.[7]