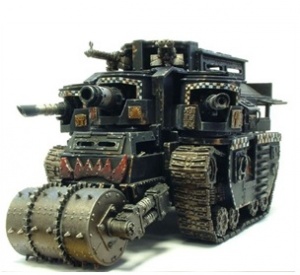 Larger then a Battlewagon, Battlefortresses are used by richer and more powerful Ork Warbosses as super-heavy assault vehicles and mobile command centers.[1]

These enormous heavily-armed vehicles bristle with heavy cannons, energy weapons, and explosive launchers. As a rule any Ork vehicle of sufficient size will be called a Battlefortress by the Orks themselves and like most Ork vehicles there is very little standardization and they are highly customized, though several variants exist such as the "Dethrolla" and "Skullhamma". Nonetheless, these vehicles are a match for any enemy counterpart on the battlefield short of a Titan. Ork Mek Boyz consider the construction of a Battlefortress to be one of their greatest achievements.[1]

The Skullhamma is a popular Mekboy variant of the Battlefortress, made from the remains of a looted Baneblade. Typically twice as big as a Battlewagon, it is often used by Speed Freaks. It has a supercharged triple-over-pressure turbo engine that takes up a good deal of its hull, but allows it to move at a speed deceptive for a vehicle its size. Its primary weapon is the massive Skullhamma Kannon.[2]

The Deathrolla is a variant of the Battlefortress. Armed with a massive Deathrolla, it is intended to plow through enemy infantry and crush them into paste.[3]

The Rokkitspitta is a variant of the Battlefortress. It is little more then a tractor platform armed with an obscenely huge array of Rokkit warheads crammed dangerously together like a fireworks display.[3]

The Flakk Battlefortress is an Ork Battlefortress geared towards air defense and shooting down incoming enemy aircraft. As such is armed with an array of anti-aircraft weaponry, such as a Flakka-Kannon, Big Shootas, and quad Flakka-Dakka Gunz.[4]