"Wot's faster than a warbuggy, more killy than a warbike, and flies through da air like a bird? I got no bleedin' idea, but I'm gonna find out."
- Kog da Flymek, pioneer of the Dethkopta.[2] 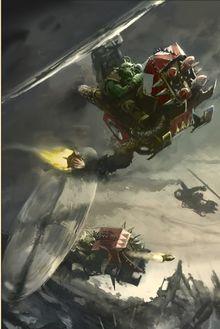 Deffkoptas are the most common type of Ork aircraft.

Deffkoptas are single-seat attack craft, comprising little more than a Warbike-like frame screaming throug the air on jet-assisted rotor blades, whirring above the pilot's head. There is little standardisation in Deffkopta pattern which is no surprise since no Mekboy ever makes the same machine twice. Because of it, Deffkoptas often feature some unusual and strange modifications. Their armaments usually consists of a twin-linked Big Shootas or Rokkit Launchas, but they may feature a Kustom Mega-Blasta, Bigbomm or a huge Buzzaw, useful for hacking off heads while flying over enemy infantry.[1b][2]

Deffkoptas are the result of decades of Meks experiments, pioneered by Kog da Flymek. Ork Meks tried to master flight for generations but a few of them managed to achieve more than a spectacular explosion. But because the Ork stubbornness and a huge number of test pilots from the lines of Speed Freaks many Mekboys manage to produce them, although exact process remains a subject of experimentation to this day.[1b][2]

Despite their ramshackle appearance, Deffkoptas can be very effective on a battlefield and deadly in assaults. Their main role is the one of long-range reconnaissance, locating tagrets for the main tribe to prey upon. Usually flying by squadrons of three craft, they range ahead of the main force and by triumph of willpower turn away from the enemy in order to return with the lads when a juicy target is located. The Deffkopta pilots favour airborne attacks, using their deadly weaponry to ravage the enemy before charging to decapitate them with their reinforced rotor blades - risky, but popular tactic. They are particularly popular within Speed Freaks and Evil Sunz warbands where its great speed and ability to traverse any terrain makes some Orks choose them over Warbikes.[1b][2]