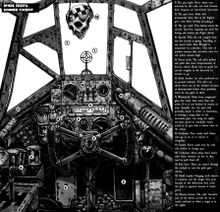 Fighta-Bommers are larger and sturdier Ork aircraft when compared to the likes of Fightas or Dakkajets. They are built to satisfy the Orkish trait of might makes right, and are thus heavily armored and armed. The Flyboyz of these craft tend to be larger and more dominant members of Ork society, often having started out as humble Dakkajet pilots. Where in other Ork Clans these would have gone on to become Nobz, here they pilot the more privileged machines of a warband's aircraft inventory. These veteran pilots lead underlings into battle and form retinues of their own, and in time may become Fly Bosses themselves.[5]

The Mek will normally start out trying to build a specific type of aircraft but will soon become indecisive and hammer on as many guns, engines and wotsits as possible. The standard Fighta-Bommer is armed with three Big Shootas, and carries ordinance such as the supa-rokkit, and the inventive Grot Bombs. While a relatively good dog-fighter, Fighta-Bommerz rely on their heavy armament and reinforced armor plating to make up for a lack of speed and maneuverability when compared to other aircraft[3]. The uses for the Ork Fighta-Bommer are rather limited. While generally more durable, the craft is easily outclassed by similar craft flown by the Imperial Navy, the Tau Air Caste, or the Eldar fleets.[Needs Citation] The Evil Suns clan has some appreciation for the craft due to its blistering speed[1a]. The most famous Fighta-Bommer is the dreaded "Vulcha", one of the oldest and longest serving of its kind. This is the personal courier of the infamous Boss Zagstruk, leader of the elite "Vulcha Squad"[1c]. These Stormboyz used their aging Fighta-Bommerz to make deep strikes onto enemy positions by recklessly jumping from the Vulcha's bomb bays and firing their Jump Packs at the last minute. The tactical advantages of this maneuver (barring any Rokkit-related mishaps) may seem fairly obvious, but they haven't been adopted by other Stormboy units, most likely because of the difficulty of retaining Meks with the skill needed to build a functioning Fighta-Bommer[1b].