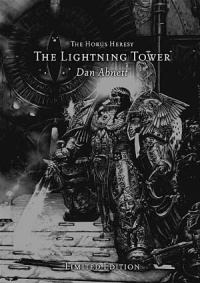 The Horus Heresy Chapbook was published in 2007 for exclusive release at a Games Day and contains two short stories, written by Graham McNeill and Dan Abnett.

A galaxy in flames, brother set against brother, and the Emperor dead on his throne. These are the nightmare visions of Konrad Curze, Primarch of the Night Lords Space Marine Legion. Increasingly consumed by them and the apparent rejection of his approach to the Great Crusade by his peers, the sire of the Night Lords must decide if his path lies under the name his father, the Emperor gave him...or under the name he was known by in the darkness before the light of the Imperium found him. The name of the Night Haunter.

With word of Horus' great betrayal having reached Terra, one man is placed in charge of organising the defences of the planet and of the Imperial Palace. One man must prepare for the onslaught that he is sure is coming, fortifying the work of artists and planning for contingencies never imagined. For Rogal Dorn, Primarch of the Imperial Fists Space Marine Legion, it is a difficult and demanding task. He discovers however, that an even greater one remains; facing his most secret fear.