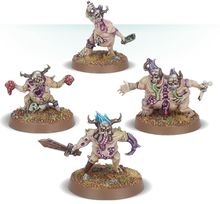 Glitchlings are Daemons of Nurgle that are similar in size and appearance to Nurglings, except that they wear metal masks. They are known to fight beside any creature that has been infected by the Gellerpox plague.[1]

Glitchling are close cousins to Nurglings first reported in M32 after Perturabo made a pact with Nurgle which saw him pervert the eight rituals of possession and turn them against the Forge World of Toil. Perturabo's ritual saw the machines rise up against the planet's ruling Tech-Priests as the Iron Warriors invade. It was then that the Glitchlings appeared among the rambling cybernetic horrors.[2]

Glitchlings are associated with technical malfunctions and general mayhem of technology. Wherever Glitchlings are found, guns will fail and Servitors will break down. Tanks in pristine condition suddenly rust as if aged hundreds of years. The true purpose of the Glitchlings is to bring entropy and disease to machines just as Nurglings bring pestilence and disease to the organic.[2]

Though their primary purpose is to disrupt technology, Glitchlings are also malicious creatures that will engage in battle with an enemy. In a fight, they will secrete a noxious substance that covers their claws, teeth, and blades so that any wounds caused are full of infectious disease.[2]