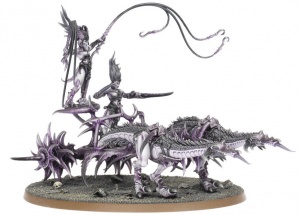 Seeker Chariots of Slaanesh are Daemonic war chariots used by Daemons of Slaanesh. Pulled by Seekers and driven by Daemonettes, these creations have seen battle in the Warp's Great Game and are unsubtle, brutal machines. They possess metal axes and barbs to cut down foes, and the chariots themselves are capable at moving at great speed.[1] 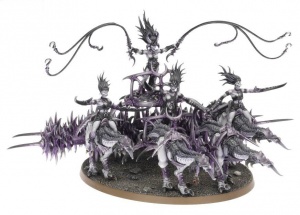 Exalted Chariots are designed to plough into where the enemy is most numerous. The chariot moves with such speed and power that anything caught beneath its blade will emerge on the other side as a fine red mist. The blade of the chariot is able to latch onto the soul of the victim even as its body is torn asunder, pulling their spiritual remains deeper into a maelstrom of metal blades[2] 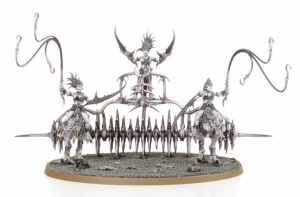 The Hellflayer is armed with a large grinding blade in its center to slice apart enemies caught in its path. The victims are cut into tiny pieces, achieving Slaanesh's pursuit of perfection by leaving the battlefield free of corpses.[1] 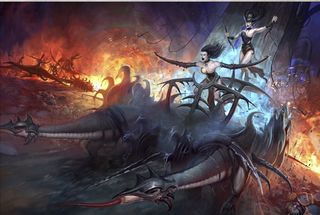