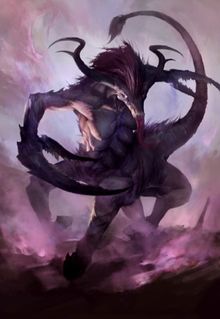 Slaanesh's Fiends are warp-birthed monstrosities that perversely mix human, reptile and insect characteristics in a single form. They are endowed with long, slender bodies covered with delicate scales, whip-like tails with mesmerizing movements, four legs with humanoid feet and two claw-like arms they employ for disemboweling their enemies. Their heads are bovine-like, covered with horns and gleaming eyes; their mouths narrow and fanged, with a characteristic long tongue used for tasting the air and endowed with a soporific substance which induces a coma in those caressed by it.[1]

In battle, the Fiends show an unnatural ability and speed, leaping towards their prey and balancing on their tail and pincers, and running in a confusing side-to-side movement which often confounds their enemies. As they gather for the kill they let out a keening song that by itself can cause death or terrible damage to organs.[1]

When not in battles, the Fiends may be found frolicking in the Realm of Slaanesh, where they amuse themselves by hunting each other and any interlopers, whom they slowly and languidly dissect and kill.[1]