From Warhammer 40k - Lexicanum
(Redirected from Flamers of Tzeentch)
Jump to: navigation, search 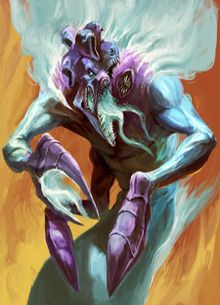 A Flamer of Tzeentch[3]

The body of a Flamer is a headless conical torso. It has two long arms, both terminating in weird stumps, which are adorned with razor-sharp teeth and flickering tongues, and continuously belching acrid and sulphuric smoke. Flamers move by bumping and hopping around, leaping into the air in a gravity-defying and comical fashion.[4]

Flamers excel at leading assaults on defensive positions, since there is no fortification that can offer protection against their magical fire. They attack by unleashing roaring gouts of alchemical fire from their arms. These fires are highly unpredictable, and can have a wide variety of effects - sometimes burning anything that they come in contact with to ashes in a multi-hued conflagration, sometimes turning them into frozen crystal, or even spraying surprised enemies with an iridescent cascade of sweet-tasting liquor. They have also been known to project gasses that dissolve all living tissues, leaving behind only empty armour and uniforms, while on other occasions, they have the exact opposite effect, leaving the enemy unscathed but naked and defenceless.[4]

Exalted Flamers are amongst the most powerful of all the Flamers of Tzeentch and exude sorcery from every pore and wrinkle of their fungoid flesh. Unlike their lesser brethren, they are capable of independent thought and action, and are powerful enough to act upon their own if they wish. More often than not, however, they are found leading units of Flamers or Pink Horrors. Exalted Flamers are able to channel magical flame to a far greater extent than ordinary Flamers and Pyrocasters, and can conjure up great billowing sheets of Warp-magic, or hurl bolts of sorcerous change that make the very air sizzle with their passing.[2]

Exalted Flamers of Tzeentch can be seen streaking through the skies of the Realm of Chaos atop Burning Chariots of Tzeentch, only occasionally deigning to appear otherwise, perhaps when robbed of their chariot by a conniving Herald of Tzeentch.[2]