Heralds of Nurgle are mortals who resisted Nurgle's Rot for a lengthy period, through some can be born from other diseases. Though the disease inevitably claims them, their resistance to the ravages of the disease created a longer incubation period, spawning a more powerful Daemon. These larger, more powerful Plaguebearers often lead armies of their kind and sometimes mount Rot Flies to form squadrons of Plague Drones.[1] 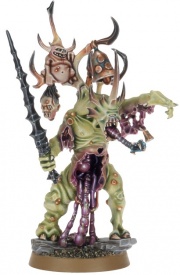 Poxbringers are the most common lieutenants of the Great Unclean Ones, in the Chaos God's Daemonic armies. They stand taller and broader than the Plaguebearers that surround them and project an air of malign authority, which help ensure the Great Unclean Ones' orders are carried out to the letter. In battle the Poxbringers wield their Baleswords with prodigious strength, to hack down the enemy's champions and sorcerers, while also unleashing their own unclean spells to corrupt and despoil.[4] 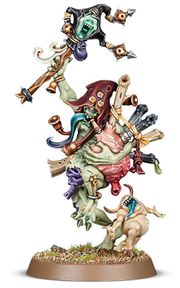 Sloppity Bilepipers perfectly sum up the repugnant jollity of the Plague God. Armed with a set of jolly gutpipes and a marotter (crafted from the remains of a previous Sloppity Bilepiper), these Heralds are the victims and carriers of the Chortling Murrain, a disease that causes its victims to laugh themselves to death. Sloppity Bilepipers cavort and joke with Nurglings, Great Unclean Ones and Beasts of Nurgle (but not Plaguebearers, who lack a sense of humour) and their appearance on the battlefield strikes horror into the hearts of their mortal foes.[2] 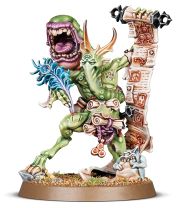 Spoilpox Scriveners are downright dour creatures when compared to the Plague God's other Daemons. It is their job to ensure that Plaguebearers meet their tallies, a job they accomplish by relentlessly browbeating and bullying their counterparts with a barrage of insults and commands. This causes the Plaguebearers to fight even harder and makes them a strategic linchpin in Nurgle's armies.[2]