Heralds of Tzeentch are the most powerful and magically gifted Horrors. These beings are the most intelligent and independent of the Pink Horrors, capable of using their sorcery forcefully enough to blast an opponent into oblivion or weave cunning illusions. They often ride Discs or Burning Chariots of Tzeentch into battle.[1] Variants include Fateskimmers, Fluxmasters, and Changecasters.[1a] 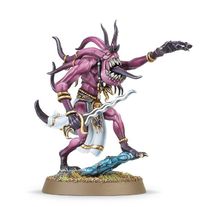 Changecasters are the most common of the Herald of Tzeentch and are named for the mutating magics they wield. They can often be found leading packs of Horrors within a host of a Scintillating Legion, a task much akin to herding beasts, so the Horrors won't caper off at any moment. Other Changecasters serve in more mundane and less frustrating roles, guarding sources of magical power or overseeing repairs within the Crystal Labyrinth.[1a] 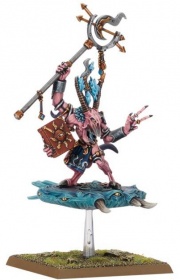 Fluxmasters are Heralds who ride atop a Disc of Tzeentch, and are so named because the great speed they fly at, reshaping reality in their wake. Fluxmasters are often used as messengers and outriders within Tzeentch's Scintillating Legions, and will frequently use their speed to dash into cover before using their psychic powers to hurl changebolts to smite their foes. Some will lead packs of Screamers in charges on the enemy's flanks, while others take charge of groups of Horrors, using their speed and advantageous position to better augment and direct their charges or confound their foes.[1a] 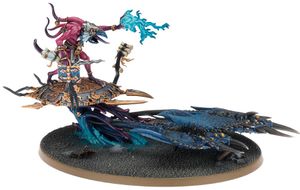 Fateskimmers are Heralds who have, most likely through trickery, acquired a Burning Chariot. These Heralds will swoop and dive across the battlefield, cackling madly as they unleash fearsome sorceries from their lofty perches before smashing their bizarre contraption into the enemy lines. The most cautious and controlling of the Fateskimmers lurk upon a battle's edge, where they move along the back lines of their host and yell orders amidst the madness and change-fire. However, there have also been several instances of Fateskimmers leading entire formations of Burning Chariots to war.[1a]