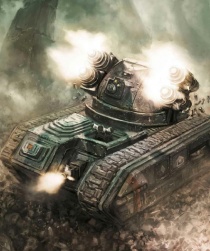 The Wyvern Suppression Tank is an Imperial Guard artillery tank. Based closely on the Hydra design, the Wyvern exchanges the Hydras anti-aircraft cannons for a pair of twin-linked Stormshard Mortars. The Mortars unleash a torrent of airbursting shrapnel shells which shred enemy infantry.[2]

The Wyvern utilizes the same auto-targeting system seen on the Hydra, making it a highly accurate system.[2] The tank excels in close urban warfare, raining curtains of shrapnel down on enemy infantry without exposing itself to harm.[1] Wyvern's fulfill a role distinct from the Basilisk, specializing in close-range and anti-infantry bombardment. They are also used for 'area-denial' operations that force even the most tenacious defenders to leave their posts or die. Even ultra-fast Jetbikes find themselves cut to pieces by experienced Wyvern crews, who have learned to lead their fire so as to ensure an airburst of shrapnel directly above the victim just as it passes through the targeted area.[2]

The Machine Spirit of these machines are renowned for their malicious streak - actively seeking the most tight-packed or vulnerable groups of foes to target.[2]