The Land Raider Achilles is a siege variant of the Space Marines' Land Raider, designed in the closing days of the Great Crusade. First forged by the Imperial Fist Legion in response to a now-extinct xenos threat, they are an incredibly rare variant with supreme longevity and, even by Land Raider standards, invulnerability. 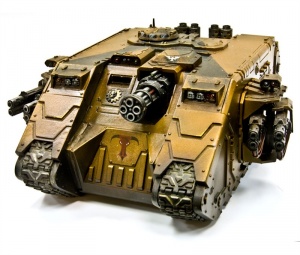 According to the Liber Armorum, work on the Achilles was begun as a joint venture between Imperial Fist Techmarines and the Archmagos of Xan-Ebon in response to a pocket xeno-empire[1] that used fearsomely potent energy weapons[4] and was located far to the galactic south. Though their name has since been forgotten to the sands of time, the xenos had nevertheless managed the impressive feat of bogging down an entire Crusade, necessitating the design of the Achilles. However the ancient mysteries used in the Achilles' final construction prevented any sort of mass production, such that by the Horus Heresy its use had not extended beyond the spearhead units of the Imperial Fists themselves, along with certain gifts delivered to the Dark Angels, Thousand Sons and Salamanders. By the time of the 41st Millennium the Land Raider Achilles exists in small numbers throughout a number of Space Marine Chapters, though fittingly only the Imperial Fists and their successors field them in significant quantities, while outside the Adeptus Astartes it is said only the Ordo Reductor of the Adeptus Mechanicus maintains access to the design. The inability to mass produce the tank means each individual machine has its own idiosyncrasies, while even the rumour of a nearby wrecked or abandoned Achillies is enough to divert an entire Space Marine strike force to reclaim it.[1]

In its role of a heavy siege tank the Achilles was fitted with a number of powerful weapons to break through the enemy's defences. Both sponson mounts are fitted with twin-linked Multi-meltas, while the centerline hull mount was originally fitted with a Viper pattern quad-launcher, a rapid-firing four-barreled cannon which has since been replaced in surviving models with a Thunderfire Cannon. While this impressive armament helps it break through a siege, it also decreases the vehicle's transportation capacity.[1][2]

The most secret arts of the Cult Mechanicus went into the construction of the Achilles' structure, such that only a supreme Master of the Forge or Enginseer Artificier could potentially comprehend and produce them. Ancient electromagnetic incantations and ferromantic computational algorithms were etched at a molecular level at each and every layer of its fabrication.[1] Every centimeter of the surface of an Achilles is etched with the most secret runes of the techno-magi, and the sigils inlay with meta-conducting zirconium.[4] The resulting tank is almost impossible to harm with any sort of projected energy weapon and only a massive kinetic impact is perhaps guaranteed to destroy it.[1]

Among the standard features the Achilles shares with the original pattern is the use of a Machine Spirit to guide the crew in operating the vehicle, however, the Enhanced Necris-Phobos Pattern Machine Spirit Genius Loci is the most warlike and frighteningly self-aware of any found on a Space Marine vehicle. The exact origins of this are unknown, with some speculation that it could be an after-effect of the vehicle's unique construction, but means that any attempt to recover these vehicles must be done so with extreme propitiation to avoid bloodshed.[1]

The Land Raider Achilles also comes standard with a Searchlight and Smoke Launchers, and can be upgraded with a pintle-mounted Storm Bolter, a Hunter-Killer Missile, Dozer Blades and/or a Siege Shield.[2]

Because of the added space taken up by the Achilles' weaponry, the vehicle can only transport up to six Space Marines; it also lacks the frontal assault ramp found on standard Land Raiders, with its passengers forced to disembark out of one of two access doors on either side of the hull.[2]

Due to its limited transport capacity the Land Raider Achilles is often fielded in conjunction with other types of Land Raiders, like Land Raider Crusaders, and used in the support high-destructive role.[4]

The Achilles-Alpha Pattern Land Raider was the original model from which the Land Raider Achilles was derived. The Achilles-Alpha was the most durable vehicle used by the Legiones Astartes, capable of shrugging off strikes that could even cripple a Fellblade and survive against the most toxic environment. Each vehicle was equipped with a quad mortar tooled with exacting precision and capable of launching shatter shells as well as the more common frag shells, and two sponson-mounted twin-linked Volkite Culverins. In the field of war, the Achilles-Alpha was used by the Legions as a spearpoint in any assault under fire trusting its near-impregnable armour and punishing weapons array to break any defense position. The construction of the vehicle fell under the direct oversight of a Forgeworld's Macro-tek Magos and was so costly to produce that no legion fielded more than a handful of them. Although the Land Raider Achilles was easier to produce it only held a fraction of the power of the original model.[5] 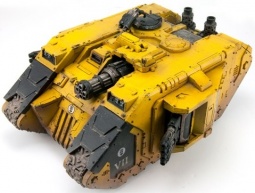