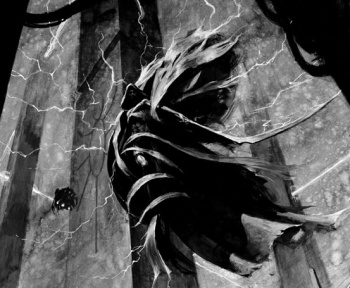 The Aza'gorod, the Nightbringer[2] (Eldar Kaelis Ra)[1b] is a C'tan, a living god of the Necrons, that survives as fragmented shards.[2]

The Nightbringer's earliest history is that of a pioneer and death bringer. Its love of pain and death is monumental, a living god of suffering and despair. When the Necrontyr first encouraged the C'tan to cross the Incorporeal Starlight Bridge into the material realm, the Nightbringer was the first to come and the first to enter a living metal body. It was found feeding on the very star that blasted the Necrontyr. Once it had become manifest, it soon learned that the life force of mortal lives tasted far superiour to its previous diet of star energy and with this revelation it consumed those who had brought it into the material universe. Only through pledges of loyalty could the Necrontyr convince it to stop destroying their race and concentrate in the vast expanses of the galaxy.[1b]

This initial episode of mortal consumption led to more destruction on the behalf of the Nightbringer. At this time the Necrontyr had been waging battle against the race known as the Old Ones. They had brought the Star Gods into the mortal plane to help them in their war. The Nightbringer reveled in the war with the Old Ones as nothing but mortal souls could satisfy its hunger. In its desire to consume more souls the Nightbringer would lay waste to entire regions of space just to feed. It is said that gradually, the Nightbringer fell further and further from the original design the Necrontyr had brought it into the material world for, namely the destruction of the Old Ones. It began to destroy and feed at will, and it reached into the minds of almost every race and planted its image into their deepest fears. It is said that it nurtured entire races to fear it and it fed on that fear.[1b]

Eventually, the Nightbringer began to feed on the other C'tan. How it was persuaded to consume other C'tan is a point of contention. One source states that it was the Deceiver that convinced it to consume the other C'tan, but another document says that it was the Laughing God of the Harlequins. The Laughing God version is explained by the Eldar in The Death of Light. It was then that the C'tan began to consume one another finding that the souls of their own kind were even sweeter than the "lesser" races. However, evidently no other C'tan could match the slaughter of the Nightbringer. It was then that the Enslaver plague occurred and the Old Ones were ultimately defeated and passed into legend.[1b]

Eventually the Nightbringer would suffer the same downfall as the rest of its remaining C'tan brethren in a revolt led by the Necron Silent King Szarekh. By this point, the Nightbringer had been gutted to the point of hubris by feeding on its fellow gods and it was brought low by the god-killing hypercannons devised by the finest Crypteks in the galaxy. The Nightbringer was convinced these weapons were being built out of tribute. The entity's shards were bound within an array of Living Metal and enslaved.[6]

A shard of Aza'gorod was eventually discovered in the Gulga System by the Ordo Xenos. A Deathwatch team was sent to recover the artifact, only to find the system rife with both biological and mechanical undead. After many months of warfare, the Deathwatch was able to recover and destroy the shard.[5]

The Nightbringer and other races

The Nightbringer in Dawn of War: Dark Crusade

The Nightbringer had planted its name as death in the minds of many races, and is known to the Eldar as Kaelis Ra, the Destroyer of Light, while humanity simply called it the Reaper. Only the Krork escaped the fear of death.[1b] An artifact was recovered detailing a prophecy of the Eldar it states "The Master of Death will drink deep from Isha's Eye". It is thought that Isha's Eye is referred to as the star Cyclo, but this has since become a dead star, possibly indicating that the Nightbringer has already fed on the star, ending its life.[1a]

The Awakening of the Nightbringer

The 4th Company of the Ultramarines, led by Captain Uriel Ventris, was sent to Pavonis as bodyguard to Ario Barzano, an Inquisitor of the Ordo Xenos, traveling in disguise as an Administratum Adept. Barzano's ostensible mission was to restore order on Pavonis, which had failed to pay its Imperial tithes, due to political unrest, mysterious terrorist activities, and frequent raids by Dark Eldar pirates. In fact, he was investigating clues that the Night Bringer was hidden somewhere on Pavonis (which would make that planet a Tomb World).[3]

Eventually a civil war broke out between the various industrial cartels that controlled the planet. One of the ringleaders of the rebel faction, Kasimir De Valtos, had incited the war to hide the fact he was digging up the tomb of the Nightbringer with the help of the Dark Eldar.[3]

When the Ultramarines and the Inquisitor heard of the civil war they made best speed for Pavonis (they were investigating an Eldar raid on another planet in the system) and they rescued the Governor and investigated the cause, discovering the cartel's real plan. Barzano was going to initiate an Exterminatus, but Uriel convinced him to let the Ultramarines launch an attack on the mine where De Valtos's men were digging.[3]

During the battle Uriel's trusted friend and confidant, Sergeant Pasanius Lysane, had his right arm lopped off by the Nightbringer, which imbued him with a small measure of the regenerative powers of the living metal of which Necron bodies were composed.[3]

Another shard of the Nightbringer appeared on Sycorax during the Indomitus Crusade. Ventris, Pasanius, and his other forces came into battle with their old foe once more, defeating it with the aid of the Mechanicum, Imperial Guard, and Legio Astorum.[7] 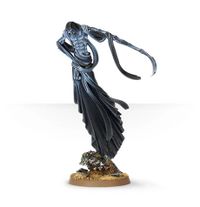 Shard of The Nightbringer[8]

The fate of the C'tan differed from current lore in previous editions. Prior to the publication of Codex: Necrons (5th Edition) the C'tan were described as having been in an aeons-long slumber from which they are only now awaking not as having been shattered into the C'tan-Shards. In addition, the C'tan consumed one another until only four remained: the Nightbringer, The Deceiver, the Outsider, and the Void Dragon.[1] Since this retcon of the background the status of some older information is uncertain.