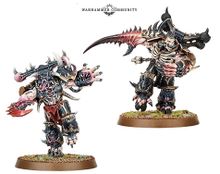 The Greater Possessed are Daemonkin that Masters of Possession have deemed worthy of transforming into the largest, strongest and most fearsome of their kind.[1]

Named the Heralds of the Dark Gods, Greater Possessed tower over their fearsome kin. They are not only stronger and far more savage, but radiate an unholy charisma that even pure creatures of the Warp recognize. Fellow Daemonkin look upon these deformed champions with great reverence, for they are living proof of the ultimate ascension that awaits them all.[1]

In battle, Greater Possessed wield giant pincer-claws and scythe-like talons of twisted bone able to slash and tear their prey apart. Every Greater Possessed is a locus of empyric power in realspace, an instrument through which the corruptions of the Warp are given form. Both mortal and daemonic warriors of Chaos alike are driven to a frenzy when they fight alongside these creatures, desperate to claim such an exalted honor for themselves.[1]