The Chosen are the most battle-hardened warriors to be found in a Chaos Space Marine army and are the equivalent of Space Marine Veterans. They usually have decades, or even centuries, of experience and are seen as the most dedicated warriors to the cause of Chaos. Often they think little of sacrificing the lives of their comrades to increase their own standing with the gods.[1a]

They always fight in the most dangerous situations, often leading by example from the front lines and take the greatest of the spoils. Sometimes they will be used to outflank or infiltrate behind enemy lines to engage in a manoeuvre from which the enemy cannot escape.[1a] They are also armed with the widest range of weapons found in any Chaos squad.[1b] 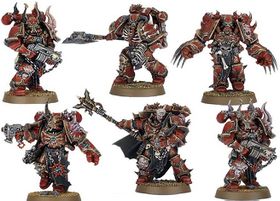