From Warhammer 40k - Lexicanum
(Redirected from Master of Execution)
Jump to: navigation, search 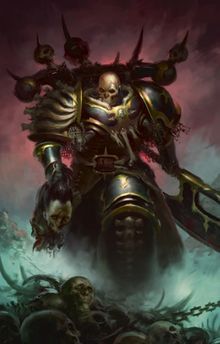 Masters of Executions are Chaos Space Marine warriors who have given their entire existence to the art of killing with melee attacks and now bestride battlefields like gods of war, that use warp-enhanced senses to seek their prey. They sometimes lead the forces of Chaos to battle.[1]

Masters of Execution specialize in the slaying of enemy champions, sacrificing them to the Dark Gods in a ritual that sees his hunger for death grow even stronger. Through sorcerous rituals, they are able to attune their murderous senses to the currents of the Warp, allowing them to see the souls of their foes. Some even go so far as to gouge out one of their eyes to allow currents to coalesce in the raw and empty socket. Thus even on the most anarchic battlefield, a Master of Execution can pick out his prey. Within a warband, Masters of Execution are often used to mete out punishment to those who seek to usurp the rule of a Chaos Lord, often in the form of a gladiatorial duel.[2] In battle, Masters of Execution are known to favour wielding Axes of Dismemberment.[1] Their expertise is evident from the gruesome array of skull and bone trophies they keep on their armour.[3]

Only the most single-minded Chaos Space Marines become Masters of Execution. It is a calling that comes in many forms, such as hearing a ceaseless stream of whispers telling them to seek out and behead the mightiest enemies, or visions of disembodied skulls from which a deluge of blood drips onto the battlefield. Others perceive the heads of their foes as repositories of knowledge that need to be forced open, or sheaves of flesh and bone that are ripe to harvest. Regardless of how they are called, these warriors cast aside all other pursuits of glory and dedicate themselves solely to murder. Some Masters of Execution find themselves compelled to butcher only foes from a specific faction or race, and this is reflected in the skull trophies that don their armor.[3]

The World Eaters are known to utilize large amounts of Masters of Executions.[1]