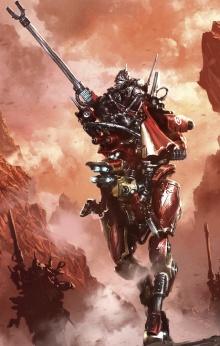 Sydonian Dragoons are a type of light walker used by Adeptus Mechanicus Skitarii.

Acting as the Skitarii's "cavalry", these vehicles are equipped with a near-perpetual motion engine Ironstrider Engine, making them a technological marvel that nearly violates the laws of thermodynamics. In battle, Sydonian Dragoons are equipped with a Taser Lance or Radium Jezzail.[1]

The first Sydonians were warrior-explorers that settled on Mars in areas with acidic mist millennia ago. In the many wars that has haunted Mars' past, those with stilt-augmetics could stalk these mists and yet live, their elevation allowing them to escape the worst effects of the acidic fog while remaining hidden from the enemy. The Sydonian Dragoons echo these tactics, using incense exhausts to emit a mist that confounds foes before they mount their deadly charge. The walker itself is piloted by a Monotask Servitor, allowing for the Dragoon to give his full focus to the fighting at hand. 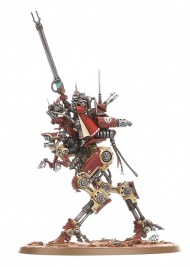