Death Korps Grenadiers are the elite shock troops of the Death Korps of Krieg comparable to the Storm Troopers used by other regiments. The Krieg regiments maintain a sizable force of Grenadiers to form the leading edge of their massed infantry attacks and are deployed for where the fighting is expected to be fiercest.[1b] 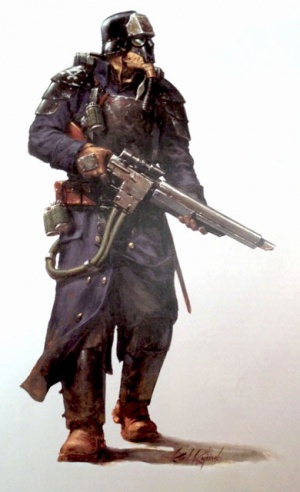 Grenadiers are drawn from the infantry, typically veterans and survivors of decimated units, and chosen usually by a Watchmaster, officer or Commissar. This is not technically a promotion, as the selected Guardsman still retains their original rank, but grenadiers are regarded as having seniority over the rank-and-file. It is regarded as a privilege and a duty to serve as a grenadier, and those who serve out their time are usually returned to their unit as a Watchmaster themselves. Statistically though eight out of ten grenadiers will not survive and once appointed one cannot refuse to serve in a grenadier squad. Many grenadiers therefore consider themselves already martyred in the Emperor's service and will not falter when the time comes to die.[1a][1b]

Once appointed grenadiers are given additional training in how to use their specalised equipment similar to Storm Troopers, though unlike conventional Storm Troopers they are not taught nor are they ever deployed via Grav-chute. Grenadier units are organized into squads consisting of a veteran Watchmaster and anywhere from four to nine grenadiers. These squads are then distributed among the line infantry to strengthen the attack and are usually given specific targets to assault, deploying either on foot or in modified Centaur transport vehicles.[1b][1c]

The grenadier uniform is the same as worn by regular infantry, but they are issued heavy Carapace Armour for added protection. The armour consists of the Mark IX helmet, rebreather facemask, three-piece shoulder guards, a chestplate with additional abdomen plates, kneepads and shinguards. It is constructed of plasteel with a layer of ceramite for added protection, heat resistance and weight reduction, although it is still regarded as cumbersome and some plates are discarded during extended operations. This extra armour also requires the use of the type V regulator, which has all the features of the standard respirator with the regulator placed in a canister worn on the back. Instead of a backpack grenadiers wear belt pounches to hold their kit including spare filters and ration packs.[1a]

Standard weapons include the type XIV lasgun (heavy) with backpack power pack as well as a good supply of Frag grenades and, when necessary, Krak grenades. While the hellgun lacks a bayonet lug grenadiers still carry a standard sword-bayonet for hand-to-hand fighting. Operating as a squad those grenadiers not issued a vox-caster or a special weapon such as a grenade launcher, melta gun or flamer can be given demolition charges or be formed into a two-man heavy weapons team with a Heavy Flamer or Heavy Stubber.[1a][1b][1c]