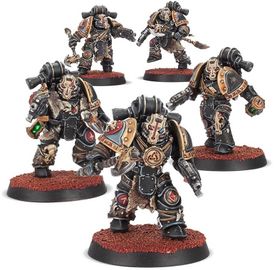 The Deathsworn were the fighting elite of the Space Wolves Legion during the Great Crusade and Horus Heresy.[1]

These warriors were the dark heart of the Legion, having witnessed the greatest horrors of what the Space Wolves had done in the name of the Emperor. Their minds and souls had been irreparably damaged to such an extent that they were no longer men or even Space Marine. Rather, they were said to be something hollow and murderous beyond reason. They had an unusually strong impulse to kill, even for the Space Wolves, and were interred into specialized units known as Deathsworn packs. These wolf-skull helmed warriors would feast on the bodies of their enemies in the name of the Cult of Morkai and wielded the Yimiria Class Stasis Bomb.[1]