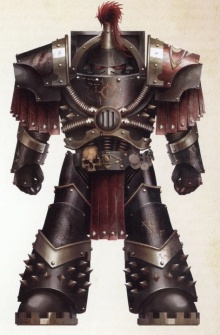 The Justaerin were the Terminator elite of the Luna Wolves and later the Sons of Horus.[1]

These black-armored Terminators were the pride of their legion, tasked with being the 'tip of the spear' of assaults where the fighting was hardest. Making up the prestigious 1st Company, they were usually directed at destroying the heart of an opposing target or conducting a decapitation strike of enemy command-and-control. These warriors were the favored of Horus, and under the direct command of First Captain Ezekyle Abaddon.[1] The name Justerin is itself derived from a powerful gang on Cthonia in the days before the Imperium.[9]

The Justaerin suffered heavy losses during the Battle for Terra, after a large number of them were destroyed by Loyalists, in Abaddon's failed attempt to attack the Saturnine Gate.[7]