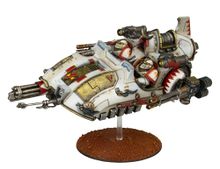 The Kyzagan Assault Speeder was a type of grav-vehicle used by the White Scars during the Great Crusade and Horus Heresy.

Developed from the Javelin, the Kyzagan Assault Speeder was able to keep pace with the swift Brotherhood's of the White Scars in battle while still acting as a hard-hitting support vehicle. Mounted with a Kheres-pattern Assault Cannon, Hunter-Killer Missiles, and two Reaper Autocannons, the Kyzagan served as a highly agile heavy weapons platform that was capable of tearing through both armored vehicles and infantry with ease, while able to provide support to the rest of the Legion's swift-moving Jetbike squadrons.[1]

These agile vehicles were in high demand among the White Scars, as they added an impressive firepower to the Legion's "Zao" and Scouting missions. They Kyzagan was proven during the Great Crusade and Heresy to be a heavily versatile vehicle on the battlefield; it did not rely on conventional tracks as the heavy armour of the Legions did, allowing it to engage in almost every conflict the White Scars pursued.[1]