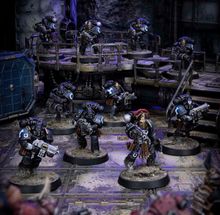 The Nemesis Destroyers were Ultramarine Destroyer Marines, who served in the Legion's 22nd 'Nemesis' Chapter, during the Great Crusade and Horus Heresy.[1]

Unlike other Destroyer Marine formations, the Nemesis Destroyers retained a high proportion of bolters as their primary armaments. This augmented the Destroyers' tactical flexibility, with the addition of specialist ammunition loads they carried. The ammo consisted of chem-agents and toxins concocted to inflict unimaginable pain. They rapidly adapted to the genetic structure of their targets, who were rendered down into grey slurry. The ammo was experimental, though, and the Ultramarines' artificers reworked the bolters' ammunition feed systems and firing mechanisms, so the bolt rounds fired at a reduced velocity. It was once purported that the Nemesis Destroyers' ammo was a further continuation of the development of toxiferran munitions started by the Death Guard during the Great Crusade. However there are no extant records that describe how the Ultramarines armorers came to devise the Nemesis' ammo, and Imperial inquiries into the matter were silenced by the highest authorities of Macragge and Terra.[1]

Regardless of their origin, the Nemesis' ammo was specifically created to ensure they caused harrowing destruction to their enemies. So much so, that the spirits of any who survived the attacks, would be broken by fear. This, combined with the Ultramarines' prodigious skill and steadfast discipline, would prove the 22nd 'Nemesis' Chapter's Destroyers to be invaluable when combating Warmaster Horus' Traitor forces, during the Horus Heresy. As the Heresy raged, the Nemesis Destroyers became instrumental in their Legion's resistance to the Word Bearers assault on Calth. However the hellish battles they endured against the Traitor Legion and their Daemon allies, forever marked the soul of the 22nd Chapter. It turned the Nemesis Destroyers into grim shadows of their former selves, which continued to persist even after new members joined their ranks.[1]