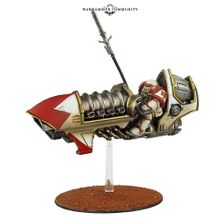 The Golden Keshig were warriors of the White Scars during the Great Crusade and Horus Heresy.

Unlike the standard Keshig, the Golden Keshig were clad in Artificer Armour instead of Terminator Armour. The Golden Keshig were the most prestigious of the White Scars heavy assault Jetbike squadrons and each of its Legionaries were superlative skilled riders. In battle they would encircle their foes at apparently random speeds and directions aboard the Shamshir Pattern Jetbikes before gathering into a single Power Lance piercing attack, known as a Zao, that struck through the center of an enemy formation. Such an attack would cause numerous casualties and sowed terror and confusion in the Golden Keshig's wake. This led them to be refereed to as "Storm Ghouls" or "Sky-Beast Tamers"[1].

Besides their power lances, Golden Keshig wielded Scatterbolt Launchers on their Jetbikes.[2]