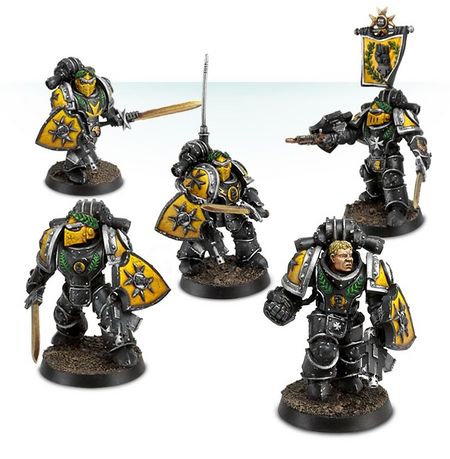 The Templars (also Templar Brethren)[4] were elite Space Marines of the Imperial Fists Legion during the Great Crusade and Horus Heresy.[1]

The Templars served as the Honour Guard of Primarch Rogal Dorn,[1] as well as the Legion's First Company.[2] Their strength rarely fell below 1,000 warriors and their members were drawn from veterans across the Legion[3]. Those nominated for such an honor, were then trained by the Company's Weapon Master, before undergoing the Templars' Temple Oath.[5]

The Captain, who led them was known as the Master of the Templars and they always wielded the Company's relic power sword, Imperator Rex. New Masters were chosen from the Templars, through a combat ritual overseen by their Primarch Rogal Dorn or a proxy sent by him. Those Templars wished to lead their Company, would need to face 200 of their brethren, in one on one combat. They would then have to defeat them all, one after another, by causing their brethren to yield to them. No time was given for rest during the ritual or to have the potential Masters' injuries treated. The Templar who successfully defeated all 200 challengers, would be declared the new Master of the Company and then given the Imperator Rex to wield.[5]