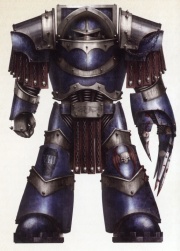 The Atramentar were the elite of the Night Lords Space Marine Legion who were equipped with Terminator Armour and formed the First Company under First Captain Jago Sevatarion.[1a][1b][1c]

Following his death of Sevatar, the Atramentar largely dissolved rather than follow Zso Sahaal, who succeeded Sevatar as the First Captain. Some, like Apothecary Talos Valcoran, put this down to Sahaal not being a Nostraman, but according to the Atramentar asked by Mercutian, a member of First Claw, 10th Company, it was mostly because the Atramentar felt no one could live up to Sevatar's reputation and he had formed the Atramentar into the brotherhood they were.[2]