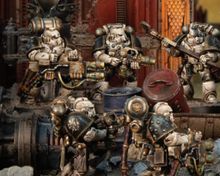 The Mortus Poisoners were the Death Guard's specially trained and equipped cadre of Flamer-wielding Destroyer Squads, during the Great Crusade and Horus Heresy.[1b]

Kept aboard the Death Guard's Poison Ships, the Poisoners wielded a high proportion of chemical munitions, even by the standards of their Legion. Frequently deployed in support of more conventional troops, their formidable weapons were a valuable asset in clearing defensive positions. However the horrifying alchemical flame the Poisoners' spread, would be the scourge of many battlefields throughout the galaxy.[1b]

Eventually, though, their close exposure to such deadly chemical and biological weapons, inevitably took a toll on the Poisoners. If they did not die at the hands of their enemies, then Poisoners faced an unavoidable demise. Either by withering away[1b] or being consumed by flames, when chemicals ate through the protective seals of their weapons' fuel canisters[1a]. The Death Guard were well aware of this, and it became an unofficial act of censure or punishment to be assigned to the Poisoners. This was reserved for members of the Legion, that failed to achieve what was asked of them by their command. Despite this, however, there were Poisoners who embraced serving within the Destroyer Squad cadre enthusiastically. These Poisoners sought to close with their enemies in order to unleash toxic death. They did so, though, with disturbingly little heed for their own longevity.[1b]

The Poisoners' Flamers unleashed hissing emerald fire, due to their fuel canister's chemical cocktail[1a]. They also carried Rad Grenades as part of their Destroyer arsenal and Poisoner squads were led into battle by Poison-masters[1b]. Due to years of exposure from deadly biological agents, their power armor was eroded and no longer displayed the original colors of the Death Guard.[1a]