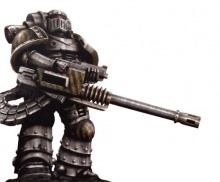 These warriors were the finest Heavy Support Squad members (the precursor to the Space Marine Devastator) of their Legion and have perfected accurate long-range firepower almost to an art. They could place both shell and blast with exacting precision as they advanced alongside assault cadres. They often were attached to elements of any assault where pinpoint accuracy allowed them to scour clean fortifications and strongpoints of enemy infantry.[1]