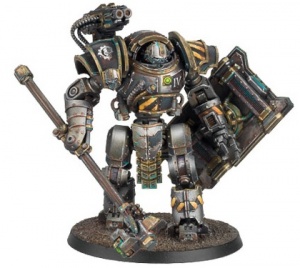 The Iron Circle was a formation of six Domitar-Ferrum Class Battle-Automata[2][Conflicting sources] that formed the Honour Guard of Iron Warriors Primarch Perturabo during the Horus Heresy.[1a] Later in the Heresy, maniples of these robots were deployed more widely and no longer exclusive to Perturabo's own Iron Circle.[2]

The Iron Circle was formed by Perturabo in the aftermath of the Battle of the Phall System after his own flagship Iron Blood was boarded.[1a] Judging his sons as having failed him, the primarch adapted the Domitar-Ferrum design from Domitar and Conqueror Class Robots combined with technologies long forbidden by the Mechanicum.[2] Telepathically linked to the Primarch and unique among Legion Honour Guards in that it did not consist of Space Marines, Perturabo saw the Iron Circle as superior to standard Legionary bodyguards as they were tireless and absolutely loyal.[1b]

As the Horus Heresy continued, Perturabo continually adapted and improved his own Iron Circle, as well as deploying maniples of the increasing number he constructed away from his side. Beyond their basic military application, it was rumoured that these maniples served to watch for failure and treachery among the sons of the increasingly paranoid primarch.[Needs Citation]

The wargear of the Iron Circle was designed by Perturabo so that his Legion's armouries could easily fabricate and supply them, consisting of a Karceri Battle Shield, Graviton Maul, and Olympia Bolt Cannon.[2]