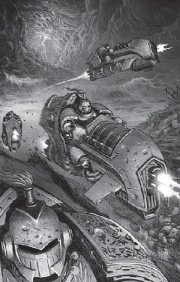 The Sagyar Mazan (or Bringers of Vengeance)[2] were suicide squads of White Scars Space Marines during the Horus Heresy.

The members of the Sagyar Mazan were those had sided with pro-Horus elements in the Legion led by Hasik Noyan-Khan during the Second Battle of Prospero. Disgraced and condemned as oathbreakers, Jaghatai Khan ordered that the surviving traitor Scars were to be organized into squads to conduct suicidal raids against enemy forces until they found atonement in death. For the next four years, the Sagyar Mazan fought and died across the galaxy in small squads, unsupported and despised by the greater White Scars legion.[1]

Ultimately, the remaining 132 Sagyar Mazan were gathered by Jaghatai at the Catallus Rift for a final chance of atonement. That moment came during the Battle of Catallus, when the Death Guard Primarch Mortarion boarded Jaghatai Khan's flagship, the Swordstorm, only to find it abandoned. Jaghatai Khan had since relocated to the Lance of Heaven and set the reactors of the Swordstorm to overload. Mortarion's path from the doomed vessel was blocked by the remaining Sagyar Magzan, whose final mission was to take the Primarch down with them. Ultimately they were massacred by the Death Guard and his Deathshroud and Terminator entourage, and Mortarion just barely escaped thanks to teleportarion.[1]