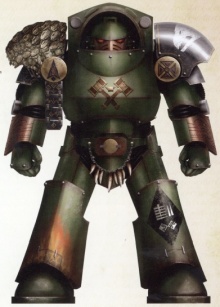 The Pyre Guard were the highest echelon of the Salamanders Space Marine Legion during the Great Crusade and Horus Heresy and as such served as Vulkan's personal Honour Guard.[1] Chosen for qualities which were described by Vulkan as having '...more fire, more fury. Like the volcanoes of ancient Nocturne, they were perpetually on the brink of eruption. Even the Pyroclasts weren't as volatile.' This warlike attitude is exemplified by the Pyre Guard's war-mantra 'Eye-to-Eye, Tooth-to-Tooth!'.[2]

As the most senior of all Salamanders officers, they were considered to be above even the Legion's Captains and disrespect from any below them would not be tolerated, regardless of station or familiarity. As the senior officers, each of the Pyre Guard also commanded one of the Salamander Legion's Chapters. They were each Chosen warriors, displaying a level of self-sacrifice and self-sufficiency that exceeded all others in a Legion dedicated to those ideals. Likened by Vulkan as being 'Like the Saburai of Old Nihon, they were fighters foremost, who could ally as a unit or function expertly on their own.' The Pyre Guard were unique in that all were born on Terra as opposed to Nocturne, however they still displayed the onyx black skin and flaming red eyes ubiquitous to the Legion due to the effects of Nocturne's radiation on their gene-seed.[2]

At the time of the late Great Crusade and the beginning of the Horus Heresy, the Pyre Guard's members were as follows: 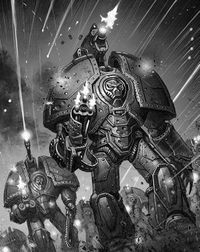